We have had Jacob sheep for six years now, but decided to join the Jacob Society in 2009 and breed two horned pedigrees. Our aim is to improve our flock each year by breeding our sheep with good quality rams.

We purchased our first pedigree ram in 2009 called Ardess Fisher from long standing member Dorothy Pendry. We also bought two hogget ewes from Dorothy as well. We purchased some more hoggets at Gosford Show in September and also bought some from the Stonecroft Flock in Co. Wicklow. We then decided to buy some sheep from England and with the help of Jean Blacknell (field officer) we purchased 1 ram (Knowlton seth, Jake to us) and 3 hoggets (Rebecca, Milly and Jenny). As you can see my kids have named all the sheep with their own names! 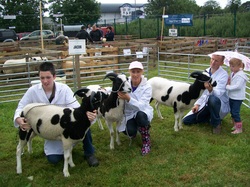 This was the first time that Omagh Show has held a Jacob class and it was a very enjoyable day. The show created alot of interest for the Jacobs and we hope this year to have more entries. We will be holding classes at Omagh, Clogher and Enniskillen shows in 2011. If you keep jacobs and want to show them please contact me or relevant shows for information on how to enter. 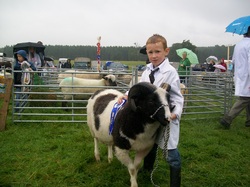 We took our ram Jake and our hogget Rebecca to Gosford Show in September 2010 and were very pleased when Rebecca was placed 2nd and Jake 3rd in their respective classes. Our son Alex came 2nd in the young handlers with Jake.